The zero-walk solution from GreyOrange and Tompkins is targeted at the largest e-commerce brands out there. (With the exception of Amazon, which has an in-house robotics company.)

“If you just Google, you know the top 100 e-commerce retailers in the U.S. or globally, that’s our market,” GreyOrange Retail Consulting Partner John Seidl said.

Seidl said the company has already designed and delivered the solution, “although it’s not in production yet,” and is in talks with two customers.

Human workers still play an important role in e-commerce fulfillment. This was seen clearly over the last year, as Amazon, UPS and FedEx added thousands of employees to their workforce. But as companies try to keep up with rising e-commerce sales and increase throughput, many are investing heavily in automation.

DHL, for example, highlighted the use of technology from Locus Robotics last year in helping it to double its pick speed from 78 units per hour to 150.

And Gartner forecast this year that demand for goods-to-person systems will quadruple through 2023, specifically citing the pandemic for increasing interest in automation. 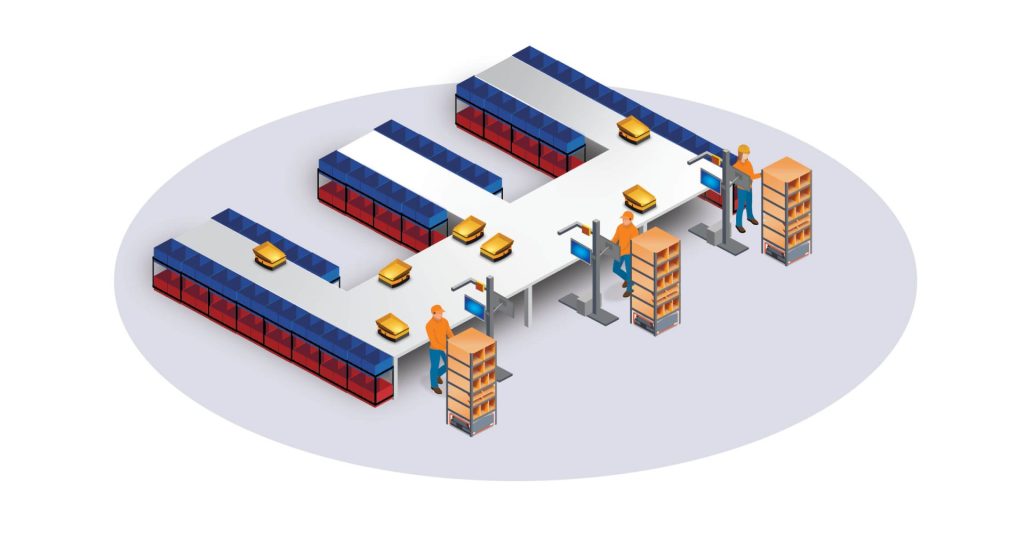 A mock-up of the zero-walk solution shows GreyOrange robots transporting shelves of inventory to pickers who then place the order on the yellow sort robots from Tompkins.

GreyOrange and Tompkins’ combined solution will shift how e-commerce warehouses assign orders to pickers. Traditionally, warehouse management systems will capture orders in real time as they come in, but they will then release them in waves based on clusters consisting of similar order types or other variables, Seidl said.

“So, we’re blowing all of that up. That just is gone,” he said. The solution gets rid of the need to “wave” orders in a goods-to-person system and allows orders to be filled in real time, rather than released in groups, Seidl said.

The capacity of the system relies on the number of sort locations where the Tompkins robots are taking the orders.

“We have a system in Maryland that has 2,700 individual source destinations, and we can make a system bigger than that,” Futch said.

The innovation here doesn’t come from the robots, which have been separately deployed by the companies before this partnership.

The next steps for the two companies involve looking for ways to automate other parts of the fulfillment process, Seidl said, noting that GreyOrange will be focused on the upstream automation while Tompkins tackles downstream tasks.

“We’re looking to do end-to-end fulfillment, fully automated,” he said. “And we’ll partner with whoever we need to partner in order to bring that to our customers.”